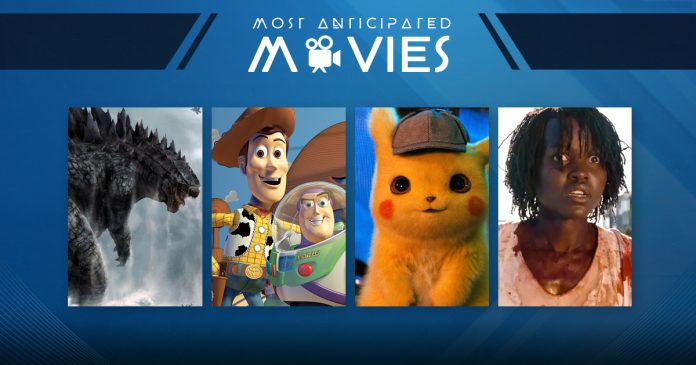 While we were a bit iffy on the quality of 2018, we can certainly say we’re unbelievably hyped for 2019 and the films it is going to bring us. We have all your standard superhero fare, except it features the finale of a 10+ year journey from the most impressive franchise known to man (Avengers: Endgame) as well as intriguing entries from the maligned other-comic-book-studio (Shazam!, Joker). There are follow ups to established IP that shut down any hope for other trailers to top (Godzilla) and weird, CGI/real world cartoon character adaptations (Detective Pikachu, Sonic the Hedgehog). That’s not even mentioning a bunch of smaller fare, or, you know, the final episode of the most well-known and loved franchise of all time. We present to you our most anticipated movies of 2019.

Godzilla: King of the Monsters

Pat: I still can’t believe this movie is happening. It looks like everything my 11 year old self thought that Godzilla 1998 was going to be (I still love that movie for different reasons though!). I grew up watching and rewatching old dubbed Godzilla movies on VHS with my brother. Every time we went to Blockbuster, we would scan the aisles and see if there was a “Godzilla Vs.” title we hadn’t yet seen. Obviously these movies are absurdly silly if you watch them now, but back then, the brawling rubber suit kaiju were awesome on a scale that only a child can envision.

Next year’s Godzilla: King of the Monsters looks to finally do big G right with a scale that realizes everything we’ve always wanted from an American Godzilla. Don’t get me wrong – I enjoyed the slow burn of Gareth Edwards’ 2014 version, it was a solid start to the MonsterVerse. But Michael Dougherty is poised to give the fans what they really want. Not only do we get to see classic Toho favorites like Mothra, Rodan, and King Ghidorah, but all signs point to this movie being packed to the brim with all out monster mayhem, something that was sorely lacking from the 2014 film. So far everything I’ve seen and heard of this film proves to me that Dougherty not only knows what he’s doing, but that he’s doing it with a love and reverence for the source material. He’s tweaked Godzilla’s design to lean just a bit more toward his classic look. He’s popped in three of our favorite monsters. He’s tasked Bear McCreary to adapt Akira Ifukube’s classic theme (and my god does it sound amazing!). He’s made Ghidorah into the giant, world-ending beast that he should be. Hell, that beautiful first trailer is possibly my favorite trailer of all time. The only thing missing is seeing my boy Anguirus up there on the big screen (fingers crossed for an after credits stinger!). The man knows his stuff and it looks like he’s firing on all cylinders to deliver the big-budget Godzilla movie fans have always dreamed of.

Godzilla takes the crown amidst some fierce competition from Avengers: Endgame and Star Wars: Episode IX, but in the end, my desire to see a massive lizard tear shit up wins over lightsabers and Infinity Stones. Long live the king.

Andy: As Pat said above, I’ve waited my entire life for this movie. Growing up, watching terribly dubbed Godzilla movies with some idiot in a rubber suit was a pastime I remember fondly. I have loved kaiju movies before the term kaiju was widely adopted thanks to Pacific Rim. I still think the teaser for the 1998 Godzilla film is one of the best of all time. I bought the soundtrack for the 98 ‘zilla and had Puff Daddy’s atrocious sampling of Zeppelin’s Kashmir with his single “Come With Me” on repeat in my teenage years. While I did enjoy the 2012 Gareth Edwards Godzilla, I wish it leaned a bit more into the hauntingly beautiful Godzilla imagery, and less cock-teasing of the big guy.

Michael Dougherty knows how to create a compelling monster. I’ve been a huge fan of the director of this upcoming Godzilla film ever since Trick R’ Treat, and thought his practical work in Krampus was great as well. Dougherty knows what we want: world-ending monster-on-monster brawls. I literally teared up when I first watched the initial trailer for this film (granted: I was on a wine tour in San Francisco and was a bit buzzed). One day I will write a ‘Top 10 Trailers of All Time’ and this one might be right at the top.

Godzilla: KotM somehow has me more hyped than my lifetime of fanboyism of Star Wars, and even the most anticipated superhero movie of all time with Avengers: Endgame.  I’ve heard rumors this will have 15 kaiju, which is absolute madness! The only question remains is how the hell they are going to top this with Godzilla vs. King Kong. Kong better start bulking up.

Chandler: Few franchises can make you laugh, cry, and feel all in one movie. And for me, Toy Story always manages to strike that chord. I grew up with Toy Story and was the same age as Andy when the first movie debuted in 1995. The movies always felt like a coming-of-age tale and as I grew older, I learned the more I would have to say goodbye to things from my youth. It was difficult to accept at times and I saw Andy go through that personal journey too as the years passed and it was time to head off to college. It felt like a very fitting end to the trilogy. Andy grew up and so did I, both entering a new chapter in our lives. But there was a feeling rest assured, we could always look back fondly on those memories.

Even so, deep down I always had a feeling Pixar would return to the well for a fourth time and make another movie. Toy Story, after all, is their most recognizable franchise, most of the original cast is returning and honestly I’m thrilled to see my favorite gang of toys back together – maybe for the last time.

The Toy Story 4 teasers haven’t revealed much about the plot but we did get to meet an odd character named Forky. A general synopsis of the plot reads, “Woody has always been confident about his place in the world and that his priority is taking care of his kid, whether that’s Andy or Bonnie. But when Bonnie adds a reluctant new toy called Forky to her room, a road trip adventure alongside old and new friends will show Woody how big the world can be for a toy.” Fans should probably be expecting something big to go down, especially if you’re getting these toys out into the open world. I mean, we saw how challenging it was for them just to navigate across a busy street in Toy Story 2.

No question, we’re going to be in for a hell of a ride since Pixar thought it was necessary to bring everyone back for another story. Tom Hanks recently called the emotional Toy Story 4 ending a, “moment in history.” I still haven’t gotten over the terrible fate that almost happened to these toys in the last movie. Maybe I should plan now and bring a box of tissues and get someone to hold me when it comes out in June.

Austin: Oh baby. All the way back in 2017 (my god, how long short amounts of time feel now) Jordan Peele, of Key & Peele and MadTV fame, released Get Out. One of the few horror movies to capture the the general population’s undying interest and the critics penchant for genre films that delve into the national zeitgeist, it went on to win a well-deserved Oscar. This launched Peele into the upper echelon of filmmakers known by name to the public, and cascaded him into a bevy of projects, from producing Spike Lee awards-hopefuls (BlacKkKlansman) to TV series (Lovecraft Country) and reboots (The Twilight Zone).

We sat idly by until his newest film was announced: another horror film, this time called Us. No details were released for a long time, other than some cast announcements (Lupita Nyong’o, Winston Duke, Elisabeth Moss). Speculation ran high (is it about the weird twins that never spoke and then had one mysteriously die? It must be about battling racial couples, right? And so on.), in a way that we don’t really see for a lot of movies. But that is just the attention Peele commands now. It felt like all this hype and conversation about him and his movie might lead to a letdown.

Well. You tell me if you’re let down.

Released on Christmas, of all days, the first trailer launched the internet into a frenzy. People called it the scariest trailer of all time (strong disagree; how can we forget Hereditary so quickly?) and discussions over what it was actually about stoked the comment sections for days to come.

Peele gave some details, saying that he wanted to make a straightforward horror and a monster story, and the trailer implies that there is some weird cloning stuff going on. The biggest enemies we face are ourselves, that’s simple enough. But with Peele, you can assume there will be more metaphorical meaning and themes beyond that. Until this releases in late March, we can just continue to speculate. There will undoubtedly be those that undermine the efforts and quality of the film because of extremely unfair expectations and the assumption that Peele will constantly wow us with unexpected twists. But based on the trailer alone, we are in for a thrilling, terrifying, and entertaining ride. I’ll have Nyong’o’s “Be careful” line from the end of the trailer haunting my dreams for months, and the eerie yet addicting remix of “I Got 5 On It” bumpin’ from my speakers for even longer.

Honorable Mentions: Avengers: Endgame; Rocketman; Godzilla; Once Upon A Time In Hollywood; IT: Chapter 2; Knives Out

Smithers @ TheChumpcast: CURVEBALL! A listing of the most anticipated movies deserves an absurd dark horse. Everyone knows that Marvel will bring it with Endgame, Jordan Peele already wins the year with Us, and Disney is just regurgitating burned out franchises. You know what hasn’t ever happened? An actual GOOD video game movie. Why can’t the first ever come from the highest grossing media franchise of all time? Look at all of the ridiculousness in this picture and tell me how it could possibly go wrong: 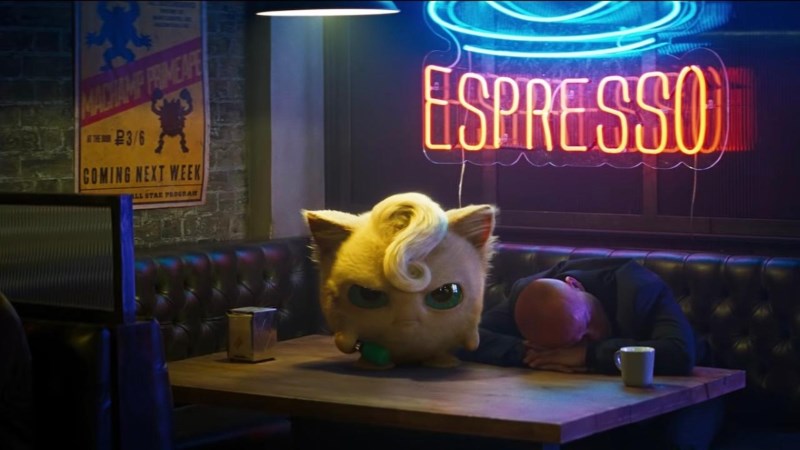 It’s not just wishful thinking that led me here. Screenwriter Nicole Perlman crushed the Guardians of the Galaxy script and contributed on Thor and Oscar-hopeful First Man. Director Rob Letterman is a bit more unknown with live action, but how hard can it be to direct Ryan Reynolds? I’m calling my shot now: This movie will end the curse of video game movie atrocities.

Be sure to let us know what movies you’re most looking forward to in 2019, and remember to check back later for our most anticipated video games and TV of 2019.

Burn Them All: Prepping for the Game of Thrones Series Finale