We return to the “Shmup” genre with another review roundup for the Nintendo Switch! Short for “Shoot ’em up”, this genre was long an arcade favorite but, alas, it has been on the decline for many years. The shmup genre still has many fans, myself included, and we still hold a deep love for this nearly forgotten genre. Being as there are so few of these games released nowadays it was quite a nice surprise when publisher Zerodiv started releasing the back catalog of Psikyo, one of the leading developers of shmup games. Last time we looked at their first three releases and we continue along with their new trinity of shmup heaven.

In this article we look at their second three releases for the Nintendo Switch, which contains more shmup goodness one of which is pretty unique!

We covered the first Strikers 1945 in our last Nintendo Switch Shmup review roundup and if you enjoyed the first game, like I did, there is certainly more to love here. Strikers 1945 II is a vertical shooter. Like the first game you have six planes to choose from with two returning and four new. Again, there are eight stages to blast your way through. This might sound like complaining, but when your game is this good it’s fine to carry on from your first game in bringing more of the good stuff for a sequel.

The games art style will seem familiar if you have played the first one as well. Using several of the same assets brings a nostalgic and familiar feel to the proceeding but there are new enemy types and bosses to keep you on your toes. You have your basic rapid fire shot which is the A button, you can also fire with Y but hold it down and you get your charge shot, B or X is for your bomb which briefly clears the screen for you.

The gameplay is fast and furious with the screen filled with death at any given time. You will have to be nimble and wisely use your bombs and charge shots to get through this. There are several difficulty levels with 5 being the default. You can also tinker with the number of both credits and continues but after level five your death no longer picks up where you die but back at the beginning of the stage.

The game can feel more like an expansion pack than a full sequel, but being as the Striker 1945 series is one of the best shmups out there, that’s fine by me!

Zero Gunner 2 is also technically a vertical shooter, but with a twist! Unlike the other Psikyo shooters you can shift in other directions by holding down A or X. When holding down the button a reticule shows on the screen and you can aim it thus changing your choppers direction. Enemies can come from any direction and you will have to constantly adjust position on the fly in order to effectively combat the advancing hordes.  The game also eschews the typical 2D visuals of the other titles Zerodiv has brought over and goes 3D. The increase in graphical ability not only enhances the surroundings but makes the unique gameplay possible.

The unique nature of having to worry about placement as well as the never ending rain of bullets make this fresh experience for shmup fans both new and old as your tear through its seven levels. Beyond that seemingly simple change, the power up system is a bit of a difference as well. Killing red enemies makes them drop “P” items which power up your shots. The catch? You have to stop shooting in order to draw the P items toward you. You will have to choose between raining death and powering up. You also have access to an “option” attack which is basically your screen clearing super. 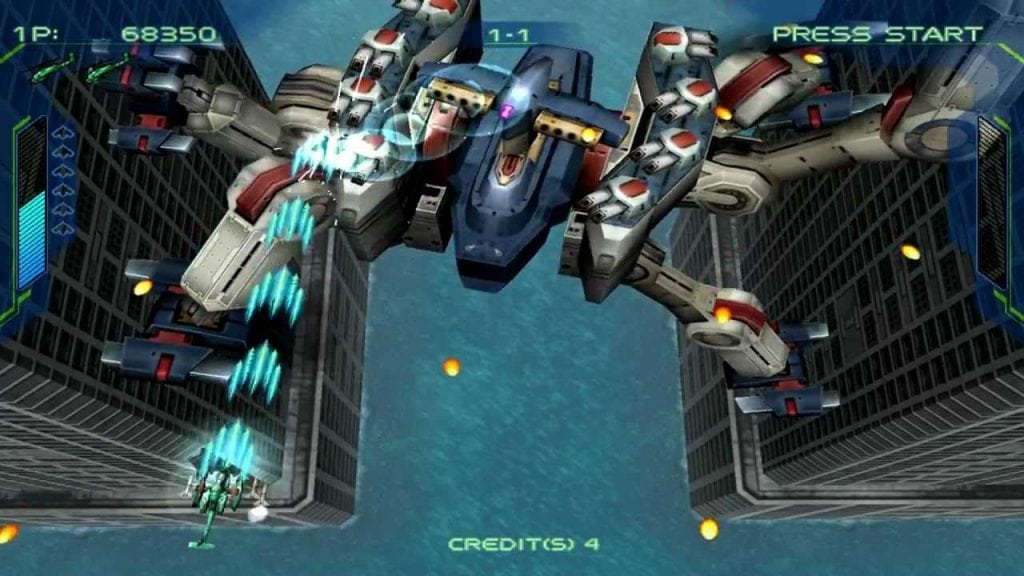 The controls are pretty intuitive once you get used to them and they add a new dimension to your shooting joy. Firing is the B button, A or Y opens up your turn-maker for positioning and X is your option attack.

Zero Gunner 2 has been a highly sought after shmup with only an arcade and Japanese Dreamcast release. Mad love to Zerodiv for bring it to us!

Samurai Aces was Psikyos first game after several members of the staff left Video Systems, so naturally they wanted to make a splash. A direct ancestor of games like Gunbird and many others, Samurai Aces began Psikyos shmup domination.

Unlike most shmups that take place either in WWII or the far flung future, Samurai Aces takes place is Samurai times like Edo Japan. The gives the background a unique style with rolling brooks, the Japanese countryside, and more. Even the enemies are influenced by Japanese culture like rolling dojos and wooden planes.

You select your character from six pilots and their unique planes, and all kinds of samurai can be selected, even a wolf! Their planes also feel suitably feudal with wooden planes, a flying bird, and typical aircraft. The graphics are a bit more simple that their later games but it still looks great has definitely has lots of character.

Samurai Aces is a vertical shooter and began Psikyos love affair with bullet hell. Skill and hand-eye coordination are needed to make it through these seven levels. Man, is it just me or does Psikyo love the number seven? The bosses especially are suitably odd looking while being a true challenge to beat.

Controls are pretty standard for the Psikyo shmup. A button shoots, Y fires and if held down does your charge shot. B and X are your death dealing bomb. This was to become the standard for Psikyo shmups, if it’s not broke, don’t fix it!

Also of note is that all three games feature the ability to play in “Tate Mode”, which is the Japanese word for vertical. Using this mode you can sit the undocked switch on its side and play the games in their original vertical dimensions thus using the entire screen. Depending on how you have your TV mounted this is available docked as well but most will not be able to do this. This is a very nice feature and helps replicate the arcade experience.

Disclaimer: Digital copies of the three games were provided by ZeroDiv for review purposes.

Enjoy these Shmup round-ups? Drop us a note in the comments and we might make it a regular thing!