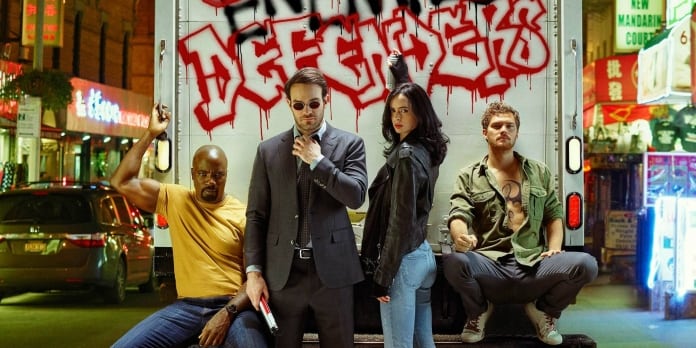 “Marvel’s The Defenders” follows Daredevil, Jessica Jones, Luke Cage and Iron Fist. A quartet of singular heroes with one common goal – to save New York City. This is the story of four solitary figures, burdened with their own personal challenges, who realize they just might be stronger when teamed together.

Need a recap of all four shows to prep you your binge session? Check out this one from ScreenCrush below.

I’m going into this show pretty blind, only having seen the first trailer, and hoping it will be a bit stronger than previous entries in this ‘miniverse’. As a huge fan of Daredevil Season 1, I felt like the show declined a bit in Season 2, with Jon Bernthal’s Punisher (which a teaser for THAT new season just hit today) being the clear highlight. I really enjoyed the slower pace of Jessica Jones, with one of Marvel’s strongest entries in the ‘villain’ category to date in David Tenant’s Kilgrave. Luke Cage unfortunately lost me halfway through Season 1, and I never got around to Iron Fist.

Did I give up on Luke Cage too soon? Was Iron Fist better than the critics claimed? Are you pumped up for The Defenders? Let us know on Twitter!

Burn Them All: Prepping for the Game of Thrones Series Finale

GlitchUp’s Most Anticipated in 2019: TV